With rising fame and stardom, some celebrities become a cult in themselves. Angelina Jolie is one such actor who has made a name for herself in more ways than one. She has been an inspiration on the forefront for her humanitarian approach, but there is also the fact that most of her body is inked with significant tattoos that keeps her in the spotlight.

For die-hard fans, their icon getting tattooed is reason enough to start a collection of their own on their bodies. It is due to celebrities such as Angelina Jolie that the world is beginning to see tattoos in a new light. While most may not agree with the number of tattoos she has, it is her story to tell, and tattoos are known for their individuality.

Angelina Jolie has been in the news constantly because of her love for tattoos. With over a dozen tattoos all over her body, Angelina is an advocate for self-expression and the meanings behind each of her tattoo choices is closely attached to her life and relationships.

During film shootings, almost all her tattoos are covered using makeup. Depending on whether the role requires showing off the tattoos or not. As an actor, her influence is quite prominent in the tattoo industry.

A brief look at the details of each of her tattoos will certainly help you decide which of her tattoos speak to you on an individual level and what you would personally like inked on your body. Aside from all the influences, your body is your canvas, and it should tell your story, whether a celebrity is a part of it, depends on you.

This is written using gothic lettering, placed between her shoulder blades at the back of the neck. This state’s “know your rights,” which is the name of her most liked band.

Noo aka Sompong, a renowned tattoo artist, inked this tattoo over the shoulder blade of her left arm. She got this inked at a hotel 16 miles north of the city of Bangkok. This hotel is located in Pathum Thani where she often gets her tattoos done.

This tattoo is written in using a script known as Khmer which is an incantation from Buddhist Pali. This is  Cambodian language. Her eldest son Maddox is originally from Cambodia, and she got this tattoo done to keep her son and herself safe from bad luck.

This tattoo translates to:

May the people who are against you run away from you

If you become rich, may these riches stay yours forever?

Your beauty will resonate with the beauty of Apsara

Many will serve, attend to and protect you no matter where you go

They will surround you completely.

Angelina is clearly a fan of different languages, and there are many tattoos placed on her body in various languages. Although this tattoo does not have much of a happy story, yet it means a lot to her. She got this tattoo done with her ex-husband Billy, and this Arabic Word means determination, in English. It is placed on her right forearm just below the elbow.

While there is a lot of superstition attached to the number “13”, Angelina does not believe so. She got the roman numeral 13 inked on her left forearm on the inner side. Later, she modified this tattoo adding the specifics of Winston Churchill’s widely popular speech where he engaged with the attendees saying that he had nothing other than tears, sweat, toil or blood to present. I have nothing to offer but blood, toil, tears, and sweat” is often highlighted. She added V MCMXL tit existing roman number 13 to complete the date of the speech.

A quote taken from Tennessee Williams is placed on her left arm. This quote includes a prayer for free-spirited people who are bound by cages constricting their right to freedom. This tattoo is special to Jolie who got this inked in the presence of her mother.

This tattoo is her savior from her previous dragon tattoo. It is placed here to cover the tattoo with a tongue, and this tongue was blue in color.  That was placed here. She got her dragon tattoo needled in Amsterdam. Now the Latin phrase meaning, “What is nourishing to body and mind is also destructive” is placed right next to the Cross. It is written in the Latin script. This Cross tattoo was one that she got a day before when she joined John Miller in Holy matrimony in 1995. This was a symbolic choice on her part, and it has no dark meanings.

This is one tattoo that has confused many of her fans. This tattoo is just the letter H, but Jolie does not specify the actual source of this tattoo. It either represents her brother James Haven or her previous boyfriend, Timothy Hutton.

It is no secret that Angelina has supported adoption as a noble cause and providing homes for children who have either been abandoned by their parents or are in need of a loving family. This cause is quite close to her heart, and she has inked the coordinates if the exact locations where she first adopted each of her children onto her body.

These are the coordinates of the location where Angelina adopted Maddox from in Cambodia.

These are the coordinates of the location in Ethiopia where Zahara (her daughter) was born.

Her biological child, Shiloh-Jolie Pitt was both at this location in Namibia. Her name is a Hebrew meaning the peaceful one.

This location is in  Vietnam, where  Plax Then (her son) was born.

These are the coordinates for the birthplace of her twin children that she adopted.  Vivienne and Knox were born here.

She also added a set of coordinates representing the location where she now ex-husband Brad Pitt was born in Oklahoma.

These coordinates cover the spot where she got her blue dragon tattoo with previous husband, Billy. She got a laser removal procedure done on the dragon tattoo; it can only be seen slightly if you take a closer look.

The placement of this tattoo is on the lower area of her back. It is 12 inches long and one of her most recent tattoos. It was inked in 2004 at the same place as her Buddhist incantation tattoo. She got it done by the same tattoo expert Sompong Kanhphai; he also blessed it using an ancient chant. This tattoo took almost two hours to create. This tattoo was needed to appreciate her Cambodian citizenship. This tattoo was inked using traditional needling methods that are practiced in Thailand.

Other tattoos and stories

She customized this tattoo which was placed on her right arm; with her ex-husband Bob Thornton. She later covered it with Arabic tattoo when they split. It was a design created using abstract lines in both horizontal and vertical patterns.

This is a symbol of death that is a reminder for Angelina to Live each day to the fullest. It is placed on her left shoulder blade and is a symbol in the Japanese language which refers to death. This was a symbol she got tattooed at another point in time, but now she has replaced it with the incantation tattoo that was for the protection and safety of child son and herself.

This was also one of the tattoos she got removed after she broke up with her husband, Billy Bob. It was an Ancient Asian dragon tattoo. She was quoted saying, “I will never be stupid enough to get a man’s name tattooed on me again. The removal of this tattoo took over five visits to the tattoo parlor.

Other than these she also has more tattoos on the lower area of her back. These include a tribal tattoo, a  window which is blue, and a  dragon (tribal) as well.

These are also symbolic choices that signify deeper meanings. The dragon tattoo is covered mostly by the Bengal tiger tattoo. The tattoo of the window symbolizes her constant search for being somewhere else. She later covered it with the tiger’s tail as she believes that she has finally found the place where she would like to be. She also had the blue dragon tattoo covered because this was a spur of the moment choice that she made while drunk. 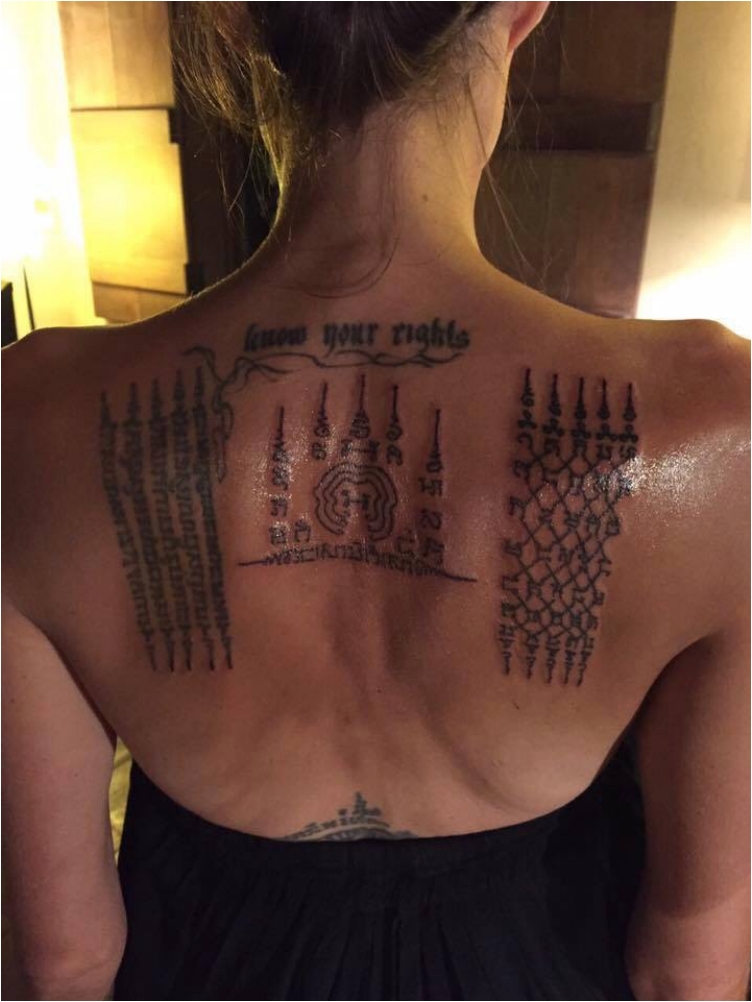 Reportedly, there are three other tattoos that the star has. There are no pictures available of these tattoos. She had a tattoo of energy waves near her navel. She got this done in the year 1988. Another tattoo is probably in her pubic area which was done at the time when she was with Billy Thornton. Angelina also has the letter M embedded in the palm of her hand, in the memory of her late mother. She is also rumored to have a tattoo that was supposedly a “binding” tattoo for her and Brad Pitt just months before their tragic split.